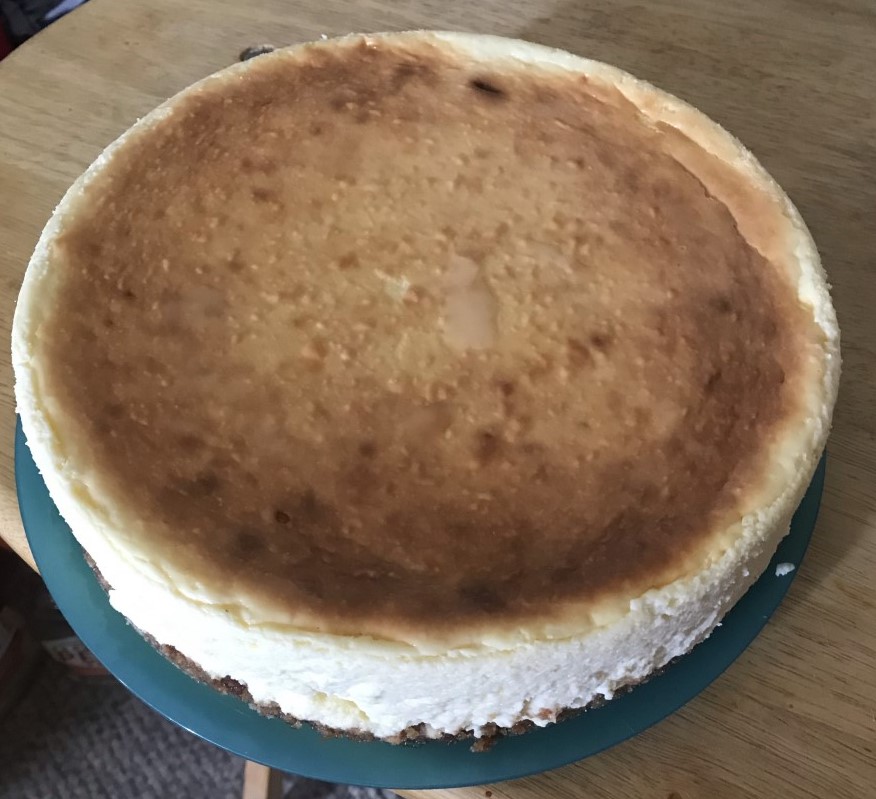 Bucket lists typically consist of a series of many things that people want to accomplish over their lifetime.  These typically range from self improvement, like teaching yourself to have a more positive outlook on life, to physical such as visiting each state in the United States.  As we find ourselves staying indoors and practicing social distancing from those closest to us, accomplishing some of the more physical aspects of our bucket list goals can seem to be out of reach at the moment.  I myself have been shut indoors and thinking of all the things that I miss doing outside until it occurred to me, there was something I could do.  Something I always wished I could do. One of my bucket list items that I never properly tackled.  Making the perfect cheesecake!

Cheesecake may seem to be something extremely minor, but as a cheesecake lover I have always preferred homemade over store-bought and have not put much effort in accomplishing this on my own.  My first attempt was this past December, and it was far from perfect.  I picked a random recipe off the internet and followed it to a ‘T’, or so I thought.  To my credit, it was edible, but there were definitely things that even as an amateur I knew were not right.  First off, the top of my cheesecake was black which my mom tried to convince me was normal, but I knew better.  Another thing, there were cracks on top.  A lot.  The recipe I followed had said this was less than ideal and based off of my own experience as a consumer, I confirmed this.  I also managed to make my homemade crust caramelized and very hard making it hard to cut through.

My husband and mother enjoyed my first attempt, but then my mother got the bright idea that, to my chagrin, I had to make one for Christmas. For my entire immediate and extended family to try.  This was a lot more daunting, especially since I wasn’t sure what I did wrong with my first cheesecake.  So Christmas rolls around and my second attempt is slightly better.  I did not bake my cheesecake as long so instead of the top being completely black, it was a blackish-brown instead.  Still overbaked but technically less burnt.  There were still cracks on top, but my crust consistency was better.  With a more crumbly texture rather than hard, I considered that a win.  After reviewing other recipes, I realized that I made a mistake when making the crust and should have used softened butter rather than melted.  It was once again found edible by my family and my one cousin who is a picky eater even liked it, so that was another mark in the win column for me.

My cheesecake-making took a hiatus, but with the introduction of COVID-19 and staying more at home, I found myself with the opportunity to make my making-the-perfect-cheesecake dream come true.  My husband was supportive of my noble quest, so I poured over different recipes once again, picked and omitted things I liked and disliked from different recipes and experimented.  Most importantly, I found out why my previous cheesecakes were black on top and cracked.  I had been cooking my cheesecakes in the oven until I was sure they were done (until the tops were overcooked) and immediately removing them from the oven to cool off.  What I learned was that after its initial bake time, I need to turn my oven off and leave my cheesecake to gradually cool off inside the oven with its door slightly ajar.  This revelation made a drastic change in not only the appearance of my cheesecake, but the overall texture.  My parents and husband were in agreeance and I was even brave enough to give my neighbor a slice which she raved about.

Although I think I have just about mastered my personal cheesecake technique, there are still some tweaks I would like to make.  Even though I would like to be out and doing my normal routine, I am glad to have had the time to work on this bucket list item that I may not have otherwise worked on.  Overall, I would consider this item to be crossed off and am looking forward to working on my next bucket list item.  In the meantime, enjoy this time at home, learn how to do that thing you always wanted to do, and don’t forget to spend some time outside in the sun during this time of social distancing.  Have a wonderful day!